When should I use a force majeure contract termination letter?

Do I need a force majeure contract termination letter?

What is a force majeure event?

Force majeure refers to situations which mean that an agreement cannot be performed (eg the obligation to provide payment or deliver goods) because of circumstances outside the control of the parties.

Determining which types of circumstances will be covered by the force majeure clause is essential. Provisions often cover natural disasters like hurricanes, floods, earthquakes, and weather disturbances sometimes referred to as ’acts of God.’ Other covered events may include war, terrorism or threats of terrorism, civil disorder, labour strikes or disruptions, fire, disease or medical epidemics or outbreaks.

It's important to check your contract to see whether such a clause exists and exactly what it covers.

'Neither party shall be liable for any failure or delay in performing their obligations where such failure or delay results from any cause that is beyond the reasonable control of that party.

Such causes include, but are not limited to: power failure, Internet Service Provider failure, acts of God, epidemic, pandemic, civil unrest, fire, flood, droughts, storms, earthquakes, collapse of buildings, explosion or accident, acts of terrorism, acts of war, governmental action, any law or any action taken by a government or public authority, including without limitation imposing an export or import restriction, quota or prohibition, or any other event that is beyond the control of the party in question.'

Ask a lawyer for advice if:

This force majeure contract termination letter is governed by the laws of England and Wales.

Get advice on cancelling your contract for force majeure

Letter assigning a contract
Transfer a business contract to another party

Novation agreement
Transfer your obligations under a contract to someone else

Letter assigning a contract
Transfer a business contract to another party

Novation agreement
Transfer your obligations under a contract to someone else 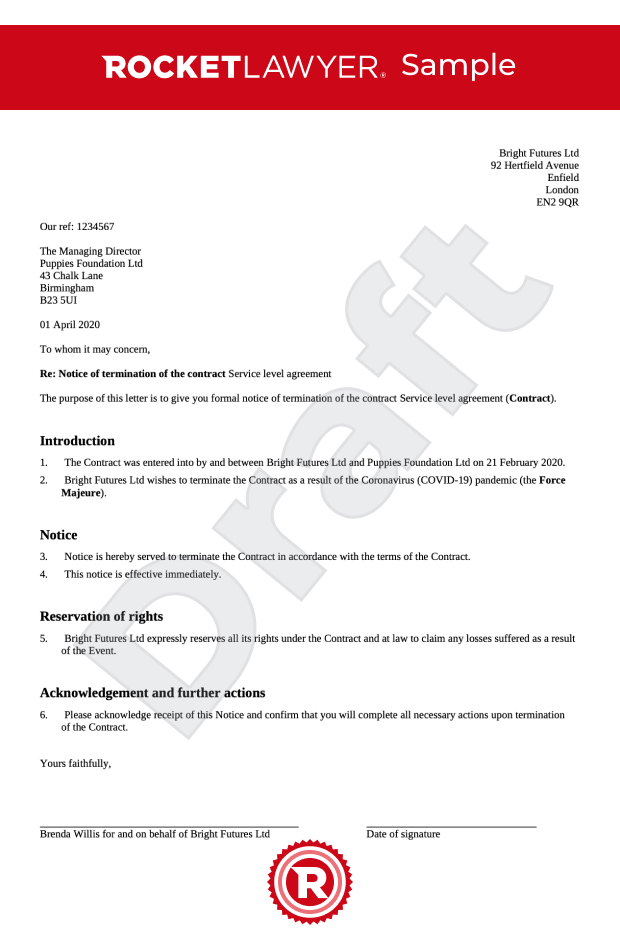