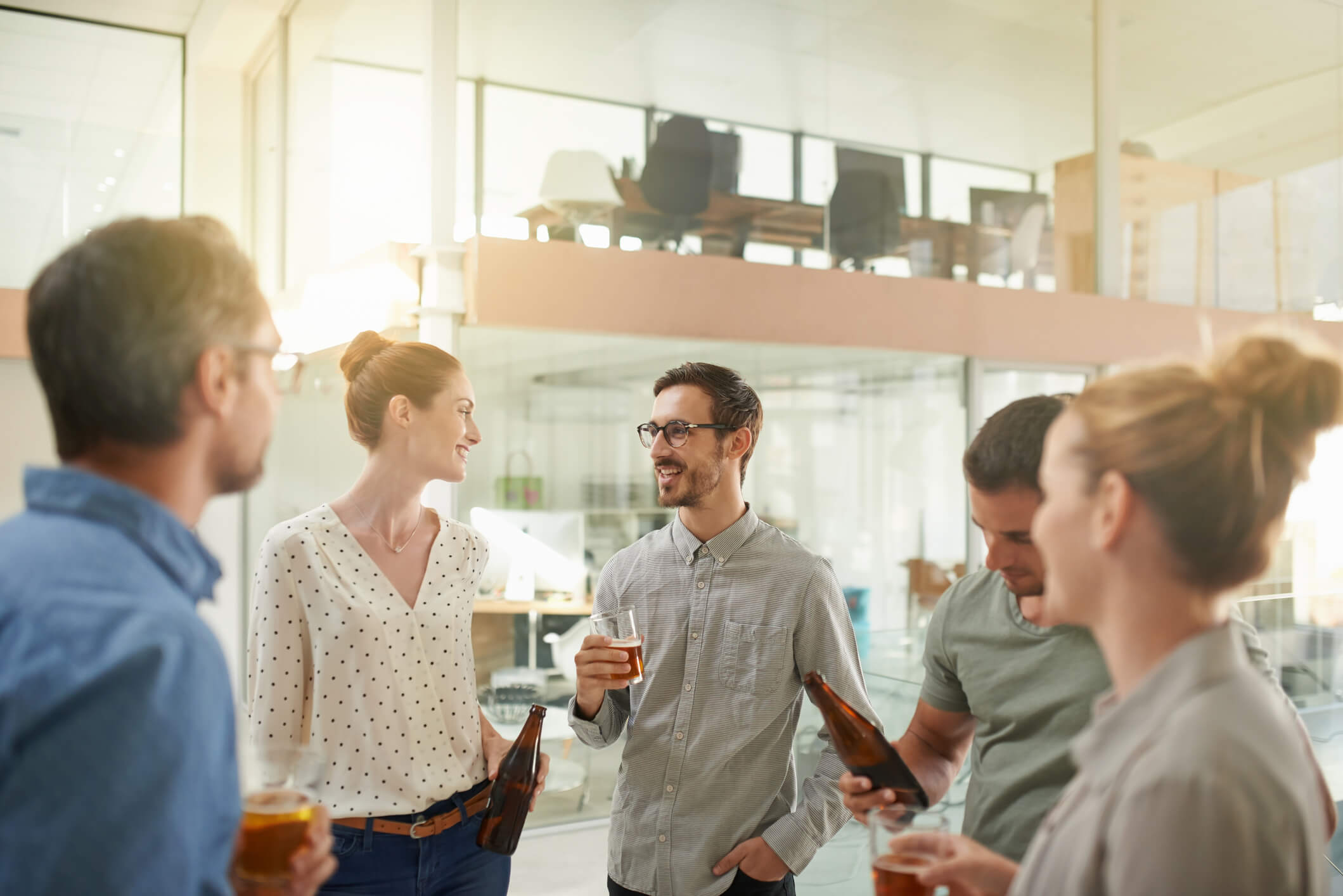 Can alcohol be consumed at work?

According to the National Statistics on Alcohol, more than 25 million adults in England regularly drink alcohol. While it is generally of no concern to employers what staff members do outside of work, drinking can have an effect on the workplace.

According to the charity Alcohol Change, which campaigns to reduce the harms of alcohol, the UK loses an estimated 167,000 working years every year due to alcohol consumption. Further, lost productivity as a result of alcohol consumption annually costs the UK economy more than £7 billion. This is due to staff consuming alcohol over the course of the working day, coming to work hungover or even still being under the influence of alcohol from the night before. But what exactly are the laws on drinking at work – be it at a holiday party, staff networking event on after-work drinks?

Is it legal to drink at work?

While there are no specific employment laws concerning the consumption of alcohol at work, some industries apply other laws which explicitly prohibit it. For example, where an employee is required to drive, operate machinery or public transport, drinking at work is prohibited. This is because the law (eg the Transport and Works Act 1992 or Road Traffic Act 1988) make it an offence to drive while under the influence of alcohol.

Can employers set their own policies?

Even if someone works in an industry that does not prohibit drinking at work, employers can set their own policies regarding workplace drinking. In fact, some workplaces (such as offices) have a zero-tolerance attitude to drinking during office hours.

Under the Health and Safety at Work Act 1974, employers have a duty to take reasonable steps to ensure the safety of employees and other workers. This duty of care covers several areas like providing a safe place of work, safe access to work, safe systems of work, safe equipment, safe and competent fellow workers and protection from unnecessary risks of injury. As a result, employers must make sure that they will not cause staff unreasonable harm or loss and, as part of this duty of care, employers may prohibit the consumption of alcohol during office hours to ensure that alcohol does not inhibit an employee’s productivity and safety.

Even where the consumption of alcohol is not prohibited (onsite or offsite), staff members may be sent home or otherwise reprimanded if they consume excessive amounts of alcohol. This is due to the duty employers owe to their staff as an employer knowingly letting staff continue work under the influence of excess alcohol, could be prosecuted if the staff members are putting themselves or others at risk.

What should employers and staff members do?

Businesses should consider what approach they have towards alcohol consumption in the workplace and clearly set this out in a workplace policy.

Employers may, for example, set out that alcohol during working hours amounts to misconduct or gross misconduct, meaning that ​​employees who break the rules may face disciplinary action. Others may allow moderate drinking during working hours provided that it does not impair staff members’ ability to perform their work.

Regardless of a business’ approach towards alcohol consumption in the workplace, any workplace policy should clearly outline what is and isn’t acceptable, so that staff members know exactly where they stand.

If your business requires such a policy on the consumption of alcohol or if you have any further questions, do not hesitate to Ask a lawyer.

Staff members should carefully check employer policies to understand where they stand regarding the consumption of alcohol while at work. If no such policy exists, they should consider approaching their manager or HR department to seek clarification on the matter.

Staff members should also bear in mind that, even if a workplace has a more relaxed attitude towards drinking at work, alcohol should generally be consumed in moderation. Having too much to drink may result in lost focus and, in some circumstances, may even cause accidents and put others at risk.

How to promote mental well-being in the workplace
Long Covid – is it a disability?
Facilities in the workplace: what are your employees entitled to?
What to expect from employment law in 2022