What is a party wall notice?

A party wall notice is used to give all adjoining neighbours notice when you are carrying out building works. You must give adjoining owners notice when proposing any work to a shared wall, shared boundary or excavations near a neighbouring property.  Adjoining owners can agree or disagree with the works proposed with a notice of acknowledgement.

If you are carrying out works governed by the Party Wall Act 1996, you need to serve a party wall notice on your neighbours. Protect yourself from disputes during home improvements by giving neighbours notice of works using this party wall notice template.

This straightforward party wall notice clearly sets out what improvements are needed, and the length of time within which you propose to start work. For further information read Party wall matters.

For use in England and Wales only.

When should I use a party wall notice?

Use this party wall notice:

What is included in a party wall notice?

Why do I need a party wall notice?

If you don't notify your neighbours, then they can obtain a court injunction which means they can stop you from carrying on with any works. If there is disagreement with the works provided then this can cause disputes between you and your neighbour which could affect the neighbour relationship.

What works will I be required to notify my neighbours about?

You must tell your neighbour if you wish to:

Examples of some work include:

You won't need to tell your neighbours about minor changes such as plastering, adding or replacing electrical wiring and sockets, or drilling to put up shelves or cabinets.

Can the notice cover several different types of work?

How much notice do I need to give?

Generally, the notice should be given at least two months before the work is due to commence. This can be one month if the notice is for a new party wall or structure, or is related to excavation.

How should I send the notice?

What can my neighbour do after I give notice?

After you give notice, your neighbour can either:

Your neighbour must inform you within 14 days in writing whether or not they consent to your notice, and you must do the same with any counter-notice. A counter-notice must be served within one month of the first notice.

What if my neighbours or adjoining owners ignore the notice?

For proposed works relating to existing party walls and structures or excavation and construction, if the adjoining owners don't respond after 14 days of being served a notice, it would be considered that a dispute has arisen.

For proposed works relating to a new building on a line of junction, if the adjoining owners don't respond after 14 days of being served notice, the building owner may only build the new wall at their own expense and as an external wall wholly within their own land.

If the neighbour dissents (or if they do not reply within 14 days, in which case, they are assumed to have dissented), a Party Wall Award is required.

In this case, both the homeowner and neighbour can appoint an agreed surveyor, usually within ten days, who can act impartially to make an award.

The agreed surveyor should be independent and not the same surveyor the homeowner might be using for their own works. Otherwise, their neighbour is unlikely to view the surveyor as neutral.

The Agreed Surveyor produces an Award which details the works proposed and a schedule of condition (including pictures of the neighbour’s home).

What happens if a dispute arises?

If a dispute arises, both property owners need to agree on an 'Agreed Surveyor' to produce a 'Party Wall Award'. Alternatively, each owner can appoint their own surveyor to draw up an award. A third surveyor is selected where the two appointed surveyors can't agree. You cannot act as your own surveyor.

If your neighbour refuses or fails to appoint a surveyor, you can appoint one on their behalf.

You can find a surveyor using the Royal Institution of Chartered Surveyors’ (RICs’) Find a Surveyor service.

What is a Party Wall Award?

A Party Wall Award is a legal document that sets out the works to be carried out and how they are to be carried out. The appointed surveyors will decide who pays the costs in producing the award and for any necessary checks that the work has been carried out according to their instructions.

If there is no dispute does a surveyor need to be appointed?

No - if there is no dispute about any party wall matters then there is no requirement to appoint a surveyor.

What if I'm not happy with the conduct of a party wall surveyor?

If you have concerns about a party wall surveyor you should contact the Citizens Advice Bureau Consumer helpline. If the surveyor is a member of a professional body such as the Royal Institute of Chartered Surveyors (RICS), they can be contacted to find out about the complaints procedures.

What if I’m not happy with the Party Wall Award?

If you are unhappy with the party wall award, you can appeal against the award at a county court within 14 days of receiving it. To do so, you will need to file an appellant’s notice at the county court, stating the reasons for your appeal.

Can I build a new party wall astride a boundary?

Only if the adjoining owner agrees. Otherwise, you must build the wall wholly on your own land.

Who pays for the work done?

You will need to pay for any work which you start on your party wall.

Your neighbour will need to pay if they ask for additional works to be done which will benefit them. They may also have to contribute to the costs if the work is needed as a result of defects or lack of repair.

If you cannot agree with your neighbour, the appointed surveyor will decide on who pays what.

Ask a lawyer for advice if:

This party wall notice is governed by the law of England and Wales.

Please reduce the size of your message to 600 characters. 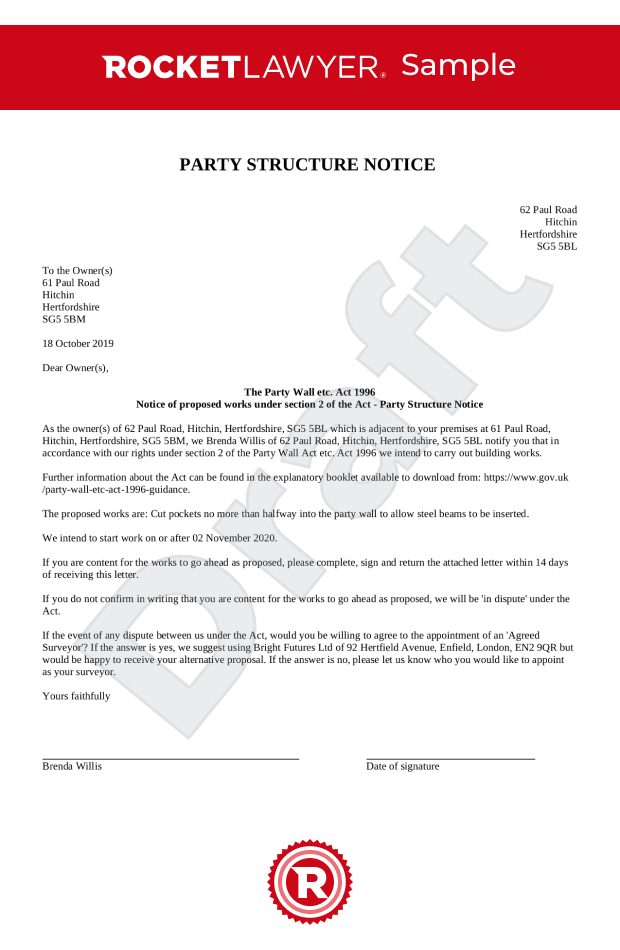