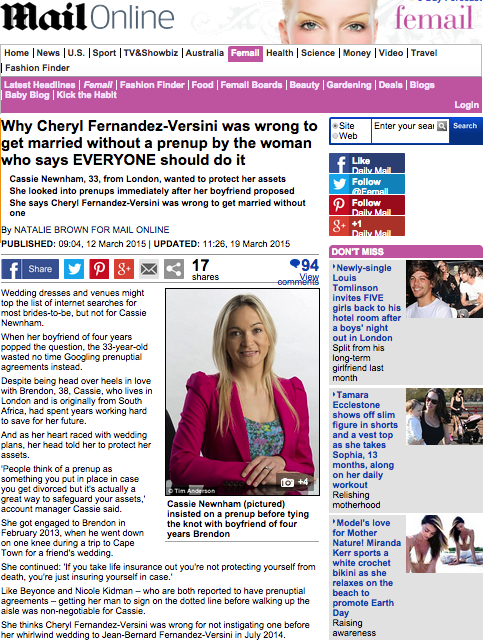 Wedding dresses and venues might top the list of internet searches for most brides-to-be, but not for Cassie Newnham.

When her boyfriend of four years popped the question, the 33-year-old wasted no time Googling prenuptial agreements instead.

Despite being head over heels in love with Brendon, 38, Cassie, who lives in London and is originally from South Africa, had spent years working hard to save for her future.

And as her heart raced with wedding plans, her head told her to protect her assets.

‘People think of a prenup as something you put in place in case you get divorced but it’s actually a great way to safeguard your assets,’ account manager Cassie said.

She got engaged to Brendon in February 2013, when he went down on one knee during a trip to Cape Town for a friend’s wedding.

She continued: ‘If you take life insurance out you’re not protecting yourself from death, you’re just insuring yourself in case.’

Like Beyonce and Nicole Kidman – who are both reported to have prenuptial agreements – getting her man to sign on the dotted line before walking up the aisle was non-negotiable for Cassie.

‘You always think “it will never happen to me” but you just don’t know,’ Cassie said.

So as Cassie and Brendon planned their big white wedding in front of 98 guests in Cape Town in January 2014, they were also busy negotiating how they would split their future possessions.

‘We both always thought prenuptial agreements were a good idea, so we were both in agreement we should get one done, says Cassie, who is expecting the couple’s first child at the end of March.

She continued: ‘Neither of us felt awkward about it at all.’

‘As well as the house we bought together before we got married, I have a property in South Africa left to me by my dad, and Brendon already had a property too.

‘In addition, we both had savings.’

She said: ‘You can tailor your prenup to whatever you want it to be, and it also protects you from debt.

‘People think it’s a legal agreement and you need a lawyer but it’s really simple and cheap.

‘We entered our details, declared what our savings and assets are and it gets checked by a lawyer.

In the event of divorce, Cassie and Brendon have agreed to split all the earnings accumulated during their marriage by 50 per cent.

The earnings accumulated before are their own.

‘Prenuptial agreements are becoming more and more common these days – it’s like taking out insurance.

‘It hasn’t impacted our relationship and we don’t talk about it anymore.

‘It’s a good thing to have in place.’

WHAT IS A PRENUP?