Create a codicil to slightly adjust and change your will without the hassle of making a whole new will.

This codicil was last reviewed on 17 October 2022.

What is a codicil?

A codicil is a legal document used to alter an existing (and current) will. Codicils are used to make one or a few minor, non-complex changes to a will. Making a codicil can be more efficient than creating a whole new will.

When should I use a codicil?

If you want to make more changes or complex changes using a codicil or require specific advice, make use of our Will and codicil drafting service.

What’s included in a codicil?

Wills and codicils is an area of law that uses a lot of specific legal terms. Some of the essential terminology that you may need to understand to create your codicil includes:

For more information, read Elements of a will.

Should I make a codicil or a new will?

Codicils are a convenient and efficient way of making minor changes to a will. However, in some circumstances, making a new will may be more appropriate. Such circumstances include:

For more information, read Codicils and Reasons to make a will.

What makes a codicil valid?

A codicil must be written down, signed, and witnessed. It must be created voluntarily by somebody who is of sound mind (ie aware of the contents and implications of the document they’re creating and its effect on their current will).

Your codicil should be signed and witnessed in line with the rules in the Wills Act 1837, the same way a will would be. The codicil must be:

For more information, read Codicils and Executing a will.

You must also ensure that you do not physically attach your codicil to your will as this could be considered altering the original will, which would invalidate it. It’s a good idea to store your codicil in the same place as your will - just don’t attach it. For more information, read Codicils and Storing your will.

Your codicil must also apply to a current and valid will in order to be effective itself. If you create an otherwise valid codicil to a will which has been cancelled and replaced, or which was never valid (eg because it was witnessed incorrectly), the wishes you’ve set out in your codicil will not stand alone (ie they will not be legally valid and need not be followed when you die).

How do I make a valid gift or validly change a gift in a codicil?

When you describe a gift, person (eg a beneficiary), or anything else (eg burial wishes) in your codicil, it’s important to be specific. If what you’re describing cannot be accurately identified, provisions relating to it (eg gifts or appointments) are likely to be ineffective.

This is particularly important for gifts. If, for example, you attempt to gift your ‘cat painting’ but do not specify which cat painting if you own multiple, this gift will likely fail. Similarly, if you attempt to gift your shares in a particular company but don’t specify which class of shares or how many, and you own multiple, this gift may fail. If a gift fails, the property you’re attempting to gift will either be passed as previously set out or with your residuary estate.

Gifts will also fail if the property you’re gifting does not form a part of your estate when you die (eg if you’ve already sold it or given it away).

If you’re unsure how to set a gift out clearly enough in your codicil, consider using our Will and codicil writing service for help.

If you have questions about how to make your codicil, you can Ask a lawyer for assistance. Also consider asking for advice if:

Get help drafting your codicil

Cohabitation agreement
Record financial arrangements between you and your cohabitee

Cohabitation agreement
Record financial arrangements between you and your cohabitee

Answer a few simple questions to make your Codicil in minutes 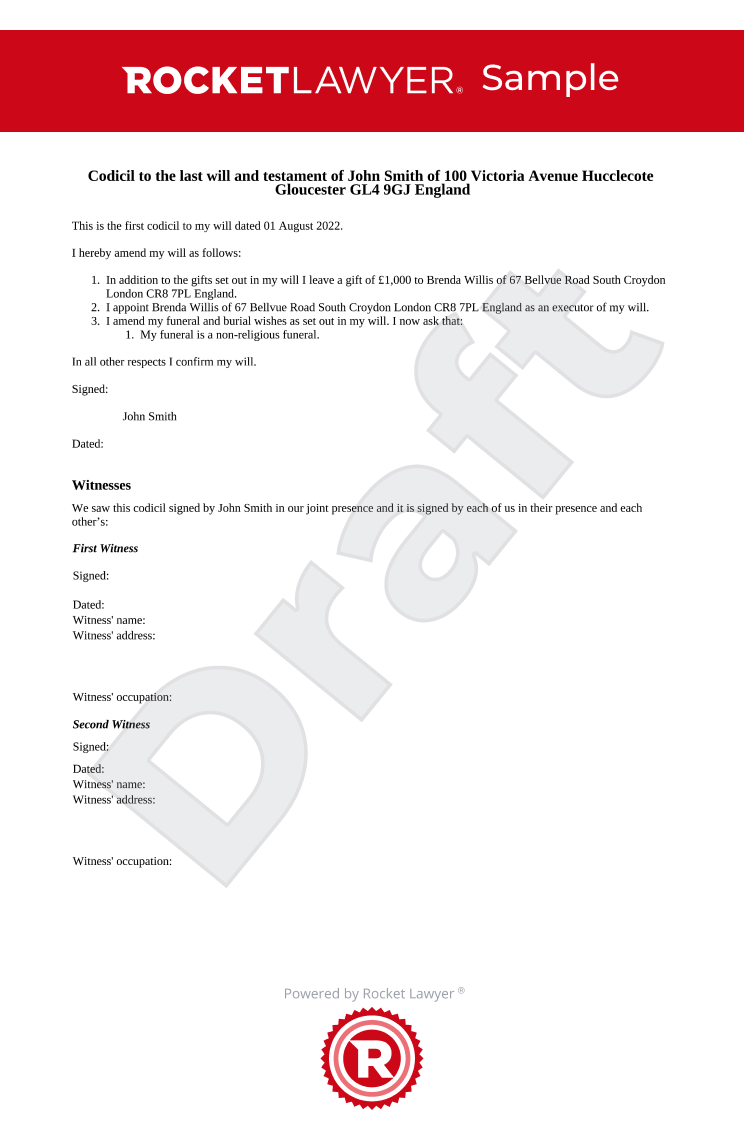